We will now add the preview for all months of 2021… to be updated.

Game Reviews and Details will be on another post… to be added.

Humble Choice August 2021 – Here is the list of Games for the Month of August which you will get at a low price below. All of games for a price of one and yours forever via game launchers like Steam, Epic Games, GOG, Uplay etc…

All information are listed below for this month’s list, all games that you will get and descriptions for each. 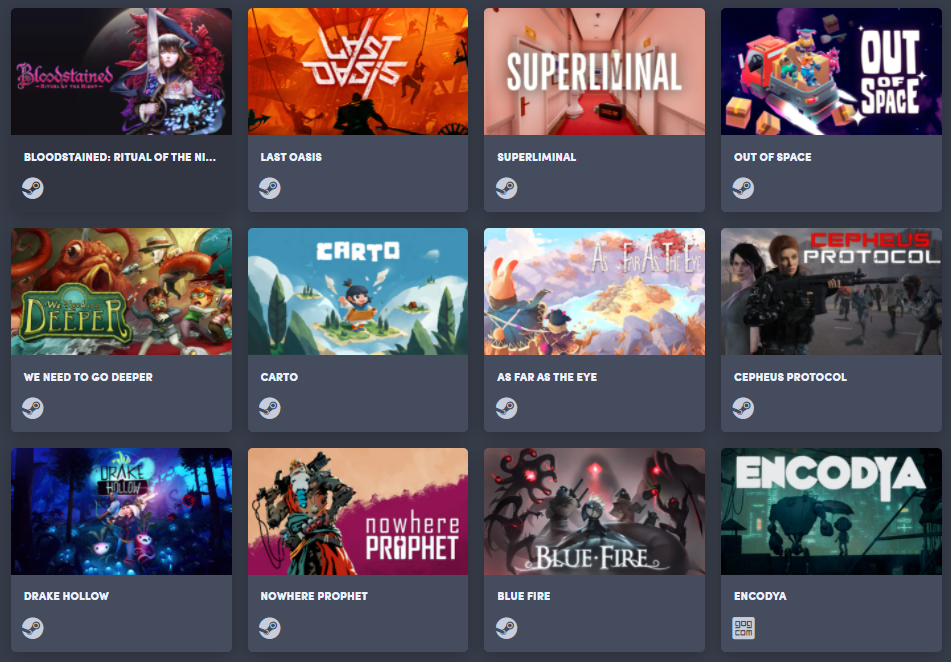 Bloodstained: Ritual of the Night – the FULL game experience, an exploration-focused, side-scroller action RPG packing all of the best features you’ve come to know and love from the Metroidvania genre into a single, content-packed game.

Last Oasis – a Nomadic Survival MMO. Earth has stopped rotating, and the last human survivors need to outrun the scorching Sun in a massive Open World.

Superliminal – a first-person puzzle game based on forced perspective and optical illusions. Puzzles in this game give you a sense of the unexpected. Players need to change their perspective and think outside the box.

Out of Space – a LOCAL and ONLINE co-op multiplayer game about living together in a house in space.

We Need To Go Deeper – a 2-4-player cooperative submarine roguelike set in a Verne-inspired undersea universe.

Carto – a charming adventure game wrapped around a unique, world-altering puzzle mechanic. Use this power to explore mysterious lands, help a quirky cast of characters, and guide Carto on her journey back to her family.

As far as the Eye – The game is a nomadic turn-based city builder. Begin a procedurally generated journey and survive halt after halt.

Cepheus Protocol – inspired by classic RTS games such as Company of Heroes and World in Conflict, alongside the book World War Z.

Drakes Hollow – build their homes, raise them, and reap the rewards of a thriving village. Keep the Drakes happy and healthy, and they’ll keep rewarding you more powerful buffs – and gifts, to boot.

Nowhere Prophet – Build a loyal band of followers and survive the journey across a broken world. Barely.

Blue Fire – Journey through the desolated kingdom of Penumbra and discover the hidden secrets of this long-forgotten land.

Previous Months… (to be updated)

PC BUILDING SIMULATOR – Build your very own PC empire, from simple diagnosis and repairs to bespoke, boutique creations that would be the envy of any enthusiast. With an ever-expanding marketplace full of real-world components you can finally stop dreaming of that ultimate PC and get out there, build it and see how it benchmarks in 3DMark!

PC Building Simulator has already enjoyed viral success with over 650,000+ downloads of its pre-alpha demo and has now been lovingly developed into a fully-fledged simulation to allow you to build the PC of your dreams.

Ancestors: The Humankind Odyssey is a third-person open world survival game where you Explore, Expand, and Evolve to advance your clan to the next generation in this exhilarating new adventure from the creator of Assassin’s Creed.

Embark on the most incredible odyssey known to humankind: human evolution. Spanning from 10 million to 2 million years ago, begin your journey, before us, in Neogene period Africa. Explore a beautiful yet ruthless world, from swinging through tree branches in the jungle to stalking prey across the golden savannah grasslands. Decide what attributes to learn and hone in order to pass down knowledge to future generations, from crafting tools to enhancing evasive tactics against predators. Just like real life, make sure to eat, drink, and sleep to stay alive and have the energy to face any danger that may come your way.

Grow your clan and find strength in numbers as you progress through critical evolutionary stages of human evolution. Your choices will write your clan’s story and determine if you can survive your evolution.

Pathologic 2 is a narrative-driven dramatic thriller about fighting a deadly outbreak in a secluded rural town. The town is dying. Face the realities of a collapsing society as you make difficult choices in seemingly lose-lose situations. The plague isn’t just a disease. You can’t save everyone.

The plague is devouring the town. The chief local healer is dead, and you are now to take his place. You’ll have to look for unexpected allies. The local kids are hiding something. Try playing by their rules.

WARHAMMER: CHAOSBANE – In a world ravaged by war and dominated by magic, you are the last hope for the Empire of Man against the Chaos hordes. Playing solo or with up to 4 in local or online co-op, choose a hero from 5 character classes with unique and complementary skills, and prepare for epic battles wielding some of the most powerful artefacts of the Old World.

TOTAL TANK SIMULATOR – Play as a commander deciding your army configuration and tactical deployment on the field on massive battles. But also experience first line action instantly by taking control of individual units on the fly, from tanks or planes to snipers and more.

SONG OF HORROR COMPLETE EDITION – The famed writer Sebastian P. Husher has gone missing, along with his entire family. Worried, his editor sent an assistant to his house in order to look for him – but he never came back… These disappearances spark a set of events that will soon reveal something dreadful: a nameless, dark entity known only as The Presence seems to be responsible.

Not Tonight is a post-Brexit management game, fusing a time-pressure RPG with a politically charged story where every decision matters. Will you join the resistance and fight the regime — or keep your head down and hope that one day this will all be a distant memory?

VAMPIRE: THE MASQUERADE – SHADOWS OF NEW YORK – You’re a nobody. An outcast in your own vampiric sect. A political prisoner of no particular value. An immigrant who never found her roots in a city of immigrants. A chain smoker whose favorite pastime is staring blankly at the streets through the windows of a fast food joint at 4AM. The sinking feeling in the pit of your stomach tells you that you’re doomed, and distorted voices from the shadows seem to agree. The curse of your clan makes interacting with everyday technology difficult. Dissociation is your natural state.

TALES OF THE NEON SEA – Tales of the Neon Sea is a retro-style pixel-art adventure, set in a fully-realized cyberpunk cityscape where you will encounter innumerous items to investigate, curious easter eggs, and a whole cast of interactive NPCs. You must analyze every detail, and discover the truth that lurks behind the heavy mist…
Take on the role of Rex, veteran cop turned hard-boiled detective. Investigate crime in a future cyberpunk world, where the magnificent sky city blots out the sun – but the neon lights never go out. Solve a strange murder case involving clues from a robot rebellion…

MINORIA – Fans of Momodora will find familiar aspects in the design and gameplay elements, as they master the ins-and-outs of parries, dodges, and a variety of different spells.
The presentation has evolved to an HD format, with aesthetics mixing 2D hand-painted backgrounds and cel-shaded characters.

DELEVELED – What goes up must come down… and what comes down must be bounced! Send momentum from one block to another to shoot them around the map. Cleverly conserve momentum to navigate around the map and flick all the switches but be careful; once you’re down there’s no way back up; this platformer has no jump button.

The Ambassador: Fractured Timelines is a twin-stick fantasy shooter centered around the ability to stop time. You’ll play as Gregor, a newly recruited member of the Eternal Fellowship, and an Ambassador of Time. Just as you are learning to use your newfound powers, the Fellowship’s capital city is mysteriously destroyed! As one of the only remaining fellows, you must find those responsible and return Tamaris to its former glory.